Though we believe that Jesus himself established his church on the day of Pentecost in Acts 2, and we strive to honor God as part of this loving heritage over the centuries, we are also proud of our congregation’s personal history as a local church in Corpus Christi.

Meeting “under the tent” 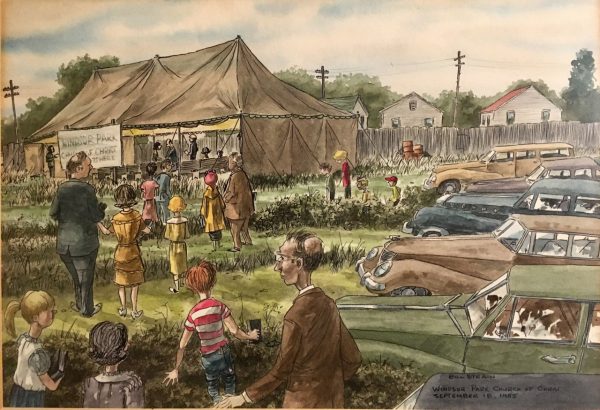 An artistic rendering by Bill Strain of the first meeting under the tent on September 18, 1955.

In August 1955, Weldon Hagemeier became Alameda Park’s preacher. The church leaders made plans to relocate, so the elders and deacons resigned to close out Alameda Park. They put up a tent at 4420 S. Staples, and their first Sunday meeting “under the tent” was September 18, 1955. Other preachers from the city were invited to speak for 2-3 nights each. These included:

Members, song leaders, elders, deacons, and others from the greater area participated and several decided to make Windsor Park their church home.

In early Spring of 1956, the church began construction of a new permanent building. They completed it in April for around $30,000. Billie Thompson became the minister in November and John Franklin followed him in October of 1958.

The original elders were Homer McDonald, David Smith, and Roy Strain, appointed in 1956. In 1959, growing attendance necessitated that the church go to two services. The church then constructed a new larger auditorium at the cost of $100,000.

On June 20, 1977, Buck Griffith came on as the pulpit minister, occupying the role for twenty five years before transitioning over to do full-time work in our Prison Ministry. At the time of Buck’s transition, he was replaced in the pulpit by Mark Pugh, who preached for Kings Crossing from 2002-2014.

In the following video, some long-time members reminisce about our history and dream about the future of our church here in Corpus Christi.

A New Location at Kings Crossing

In the early 2000s, it was becoming clear that the physical location on Staples St. was no longer sufficient to meet the church’s needs. The facility was ageing. The property was landlocked. Even though many of our members had personally helped in the physical construction of the building, there was an increasing consensus that despite our love for the old building, it was just a building. For God to do new and bigger things, we were going to need new space.

Leaders began to explore properties far on the south side of Corpus Christi. We reached a generous agreement with the Kings Crossing neighborhood, who desired to have a church located on the spot where we would eventually be. Through the incredible generosity of our members and much help from God, we were able to secure a new location and begin construction on a new building.

Below are some photos that show:

It was intended from the beginning that Kings Crossing’s initial facilities would not be sufficient to accommodate all of our needs. A new transition at Kings Crossing occurred as Mark Adams came into the pulpit role in September 2014. Through much generosity, the congregation was nearly out of debt from the initial construction, paying it off entirely in December of 2016. Meanwhile, Mark began working with several of the younger men and women to develop a strategic vision plan for the next five years called Vision 2030.

Here are some photos from December 2016 when we celebrated our Mortgage-Burning Sunday. Debt free! It was a very happy occasion for our church, filled with hope about what God might do next at Kings Crossing.

In conjunction with the elders, many of the leaders came up with four core values that are guiding Kings Crossing’s choices into the present time. These are:

Dedicated to following these goals to their implications for our current setup, Kings Crossing has made several changes in the last few years. These have included:

The final culmination of these was the plan for a new multipurpose building that will sit next to our current one. This will provide active space for activities as well as a dedicated youth center where our KXY youth program can grow.

We are excited to be far along in the plans for this new facility, believing it will create enormous opportunities for outreach to our community.

To learn more about our ongoing plans for the future, visit the VISION 2030 section of our website.